I give K Dot a solid on his 4th album, Damn. In the days leading up to the release, one thought pervaded my mind. Just keep telling the truth. Por favor, (pooooooor favoooooor)  I beseech you.

He did. And he used beats that don't sound like every other intro out there. I continued listening. My trigger finger to jump through songs took a break while I listened to Damn.

I got quite drunk too.

Kendrick Lamar uses his voice like an instrumente. Along with his lyrics, this skill keeps him in heavy rotation--the rotation of the elite. I want to take the energy he has to offer into me. At the end of the record, I feel as though I've been taken to a more authentic place. Que estoy lleno de esta energía bien fuerte.

"I cant' fake humble because your ass is insecure."

That line has yet to leave me. 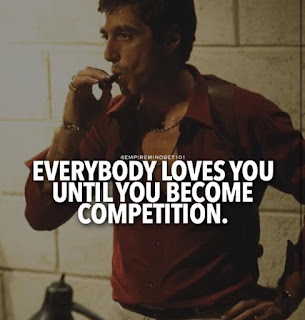 This is the last man I fucked with. I didn't even know we were in competition.

In summation, thumbs up to Damn. K Dot is the realest indeed.

Going to pour the beer that will push me over the edge of being able to type.

*Throw your hands up*


Posted by ReadEmilyEck at 7:54 PM